Nowadays I spend a good chunk of my time working on patent-related matters. Many people -- including my younger self -- would judge this very negatively, because they think -- correctly, in my view -- that the current patent system is, essentially, evil. Recently, I've been motivated to collect some of my thoughts about the patent system, and posted them to the Mimecast blog. You can find them in these two posts, if you're interested:

Software Patents and the Hacker Ethic

The Scourge of Patent Trolls
Posted by Nathaniel Borenstein at 6:45 AM No comments:

Email Don't Impress Me Much 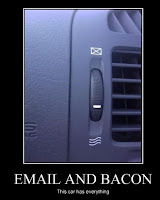 If you're old enough, you can probably remember the day when having an email address was a status symbol in certain crowds. Now, renouncing email is a status symbol for certain rich people, as I discuss in my latest post on the Mimecast blog.
Posted by Nathaniel Borenstein at 1:54 PM No comments:

When Hiring Remote Workers Makes You a Better Person

Recently I had the pleasure of participating in a debate, on BusinessWeek.com, about the pros and cons of letting employees work from home. This led me to think more about the most amazing experience I ever had with a work-at-home employee, a remarkable and inspiring fellow named John Ferguson. I write about him here, on the Mimecast blog.
Posted by Nathaniel Borenstein at 4:06 AM No comments:

Goodbye, Glen: A Last Look at a Childhood Hero

At age ten, I hadn't yet developed the passions that make pop music so vitally important to many adolescents. I had sung in youth choirs for several years, where I was always much appreciated by the choir directors -- though probably less for my high tenor voice than for my willingness to throw myself into the works full-voiced and without inhibition. I had also started taking classical guitar lessons in fourth grade, the only new form of study my parents permitted me after bringing the rest of my education to a screeching halt the previous summer. I loved both singing and playing guitar, and thought I had a fair bit of talent for both.

Nonetheless, I remained much more interested in collecting the albums of comics and humorists than musical groups, more focused on Alan Sherman than the Beatles. So it was a pair of humorists that led me, via musical comedy, to my first appreciation of popular music. My journey started with the Smothers Brothers.

Tom and Dick Smothers were an acutal pair of brothers, highly talented musically, whose comic personae were a pair of brothers trying to be a folk music act, but whose musical efforts were consistently sabotaged by Tom's goofy antics and the ensuing brotherly bickering. When they sang, their clean, soaring harmonies were a revelation to my ten-year-old self; I came for the comedy and stayed for the songs.

Naturally, when they got their big chance on television, the Smothers Brothers Comedy Hour became a highlight of my week. Every Sunday night, when the show I'd so eagerly awaited came to an end, I knew that the weekend was over, and it was time for bed and another five days of mind-numbing tedium.

But I always thought of the music as incidental to the comedy until the day, when I was a bit over ten years old, that a goofy-faced young man named Glen Campbell stepped out onto the Smothers' stage and began singing John Hartford's "Gentle On My Mind." Campbell was instantly recognizable as what I thought of as a hick -- a country boy with a silly accent, a hard person to take seriously in many contexts.

Nonetheless, I was mesmerized. Between the range, strength, and purity of his voice and the casual virtuousity with which he laid down his guitar licks, I saw -- probably for the first time in my life -- something that I wanted to become but could never be. My singing has always been pleasant and appreciated, and my guitar marginally competent, but I knew immediately that I could practice a thousand years and never sound like Glen Campbell, accent or no. My fingers wouldn't move as fast as his if I flailed them about randomly, and my voice hadn't a fraction of his power or range.

Having grown up a prodigy, I was for the first time aware of being flat-out inferior at something I cared about. For the first time, though by no means the last, I gazed longingly down a path I could never walk. I could possibly have still become a rock star, with a lot of luck; some of them don't seem to have any more talent than I do, certainly. But I never really seriously considered a path where I'd have to hope for luck to compensate for marginal abilities.

Of course, time went on. My fondness for Glen Campbell became an embarassment in the era of Woodstock and the Summer of Love, and I found more culturally appropriate guitar heroes in Jimi Hendrix, Steve Howe, or later Leo Kottke and Michael Hedges. A young hippie wannabe couldn't easily admit to a soft spot for Glen Campbell, who meanwhile became both a right-wing activist and, increasingly, a parody of himself with songs like "Rhinestone Cowboy." He receded safely into my past, one of those childish things we put aside on the road to adulthood.

Then, in 2011, a full 44 years after his music first opened my eyes, I heard an interview with Glen Campbell on the radio. He had been diagnosed with Alzheimer's Disease, and was facing the slow loss of his memory, his talents, everything he had ever been. But rather than fade quietly into the twilight, like his friend Ronald Reagan, he decided to go on one last tour while he still could. With three of his children forming half his backing band, he hit the road, and I found myself with the chance to see him in person for the first and last time.

The Ann Arbor Folk Festival is a remarkable annual event. For two consecutive nights, a five hour concert presents a dazzling array of performers old and new, averaging 20 or 30 minutes apiece, as a fundraiser for Ann Arbor's venerable folk music venue, The Ark. I've been many times, nearly always discovering a new act that quickly became one of my favorites. When they announced that the second night of the 2012 show would be headlined by Nanci Griffith, Emmy Lou Harris, and Glen Campbell, nothing short of jail would have kept me away.

Naively, I had simply assumed that Glen Campbell was the marquee star and would be the final act. I've worshiped Emmy Lou Harris from afar for almost four decades, but it never occurred to me that she'd be the one to close out the show. Thus it was that I saw something I never thought I'd see: Emmy Lou Harris as anticlimax. By the time she stepped on stage, the crowd had almost burned itself out saying goodbye to Glen.

I'd like to tell you that there was no sign of the disease that is ravaging him, but the truth is far more interesting. His memory is clearly already suffering -- he forgot or mangled the words a half dozen or so times, and several times forgot what song was to come next. It was sad, but also touching to watch as his sons and daughter in the band gently guided him back.

Still, he was magnificent, with a voice as strong as ever, from the rich low notes of "Wichita Lineman" to the falsetto yodels of "Lovesick Blues." And remarkably, his wizardly guitar licks were perfect; at 76 with Alzheimer's, he can still do things with the guitar I will never, ever do. And when I closed my eyes he was once again a 30-year-old cowboy opening the eyes of a ten-year-old ex-prodigy, glued to the television, newly aware of his own limits and possibilities, wondering how far his meager talents might take him.

Posted by Nathaniel Borenstein at 8:53 AM No comments:

Vint Cerf is Too Modest; Internet Access is a Human Right

In his January 4 op-ed piece, Vint Cerf argued that Internet access is not a human right. While I consider Vint a friend and have tremendous respect for his achievements, I think he’s wrong in this case...

Read the full post on my work blog.
Posted by Nathaniel Borenstein at 8:39 AM No comments:

A Tale of Two CEOs: Shades of Gray in Executive Pay

I'm predisposed to be of two minds in debates about economic issues. On the one hand, I've founded several companies and witnessed first hand the incredible power of competition as a driver of innovation and value creation. On the other hand, I grew up in a family of compassionate activists who devoted much of their lives to issues of social justice. I can't help seeing both sides of most issues.

For example, I see no reason a company shouldn't be allowed to pay its top employees as much as it wants. When cronyism can be kept at bay, such pay will tend to reflect profits and performance in an appropriate way. However, I also believe that the fortunate recipients of these hefty paydays should have the good grace not to complain about significantly higher tax rates.

However, I am as outraged as anyone that HP is paying Leo Apotheker a severance package worth roughly $33 million. Apotheker presided over a near-halving of the company's value during less than a year as CEO. There is no conceivable sense in which he is being paid for performance; he is being taken care of by his cronies, who would expect the same if the situation were reversed.

If I were an HP shareholder -- which I'm not, because the company has shown no hint of a plan for many years now -- I would be seething with outrage.

On the other hand, I don't mind that Sam Palmisano is leaving IBM with a severance package worth something like $170 million. Sam -- no, I'm not his crony, everyone at IBM called him by his first name -- spent nine years as IBM's CEO. During that time, the value of the company roughly doubled, creating $90 billion or so in shareholder value. Sam helped create roughly $600 of value for each dollar/year in his severance.

In contrast, Apotheker, when he ended his 11 months at HP, was given a dollar for every thousand dollars that HP lost in valuation on his watch. He got $33 million for being fired. If I were an HP shareholder -- which I'm not, because I've been paying attention -- I'd want to sue the Board of Directors for malfeasance.

The genius of capitalism is the motivation that great rewards might be earned by great efforts. Capitalism itself is undermined when long-term cronies guarantee prosperity no matter how much an executive screws up.

I have a simple proposal. Set a statutory maximum for guaranteed severance packages -- a million dollars strikes me as plenty for any failed loser of a CEO. Bigger bucks could still be part of a severance package, but they should be calculated as incentive payments, like bonuses. The big parting rewards should be tied to some measure of performance -- profits, stock price, employee satisfaction, even cleanliness of restrooms would be an improvement -- to give these high-powered one percenters a bit more motivation to actually do their jobs.
Posted by Nathaniel Borenstein at 8:34 AM 1 comment: