In the middle of the day, the networked Brother printer stopped working.  Although I was hundreds of miles from my Ph.D. hood, I remembered the sacred incantation:  reboot everything.  Nowadays this is almost a cure-all, but not so this time.  I rebooted the printer, network, and client.  No Joy.

I checked the printer’s configuration.  In a sudden fit of dementia, it had completely forgotten the wireless network.  So I configured it anew, and… it told me I had the wrong wifi access code.

Now, this is a password that is easy to mistype, so I tried again.   Then I questioned my memory and tried a variant a few times.   Then I went to my son-in-law and confirmed my original memory of the password.  With renewed certainty, I tried again.  Several times.  Nope.  Adding insult to injury, my helpful Brother printed an error page every time the authentication failed, so every password attempt killed a bit of a tree.

And that’s when I happened to notice something squirrelly about the Brother keyboard.  Throwing caution to the wind, I will reveal that the access code I was typing contained an “@“ sign.

The Brother printer helpfully provides an @ on the primary keyboard — prioritizing it over even the comma, as if one types email addresses into the printer all that often — and that’s what I had been using -- lower right, above the friendly "OK": 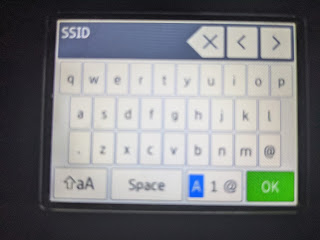 But then, by chance, I noticed something odd:  the tertiary keyboard is all symbols, and it ALSO has an @ -- at far right, center: 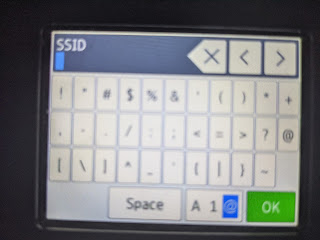 I tried one more time, now using the @ from the third screen rather than the first.  Worked perfectly.

It's an old printer, but you'd have to be older than me for this to be an acceptable design flaw.  A novel entry in the User Interface Hall of Shame.

Posted by Nathaniel Borenstein at 3:50 PM